Today marks two weeks in as an Audi owner. I owe you faithful readers of this series some thoughts.

The honeymoon is not over; I still love, love, love my Q5. It is pretty much everything I was looking for in a replacement for my Big Chevys.[1] Nimble, quick, comfortable. It has just enough sportiness to make it fun while remaining just big enough to have use as a family utility vehicle. All five of us rode in it to C’s graduation Wednesday and there were no complaints from the girls as they sat three across in the backseat.

It is far from a small car, but after six years in the Big Chevys, it feels tiny to me. According to my handy-dandy car research spreadsheet, the Q5 is 20 inches shorter in length, six inches narrower, and nine inches shorter in height compared to the Tahoe. I knew these numbers. But they really hit me the first time I walked into the garage and could actually see S’s Grand Cherokee on the far side. The Tahoe completely blocked her car from view. I should have taken a Before picture so you could see the difference, too. 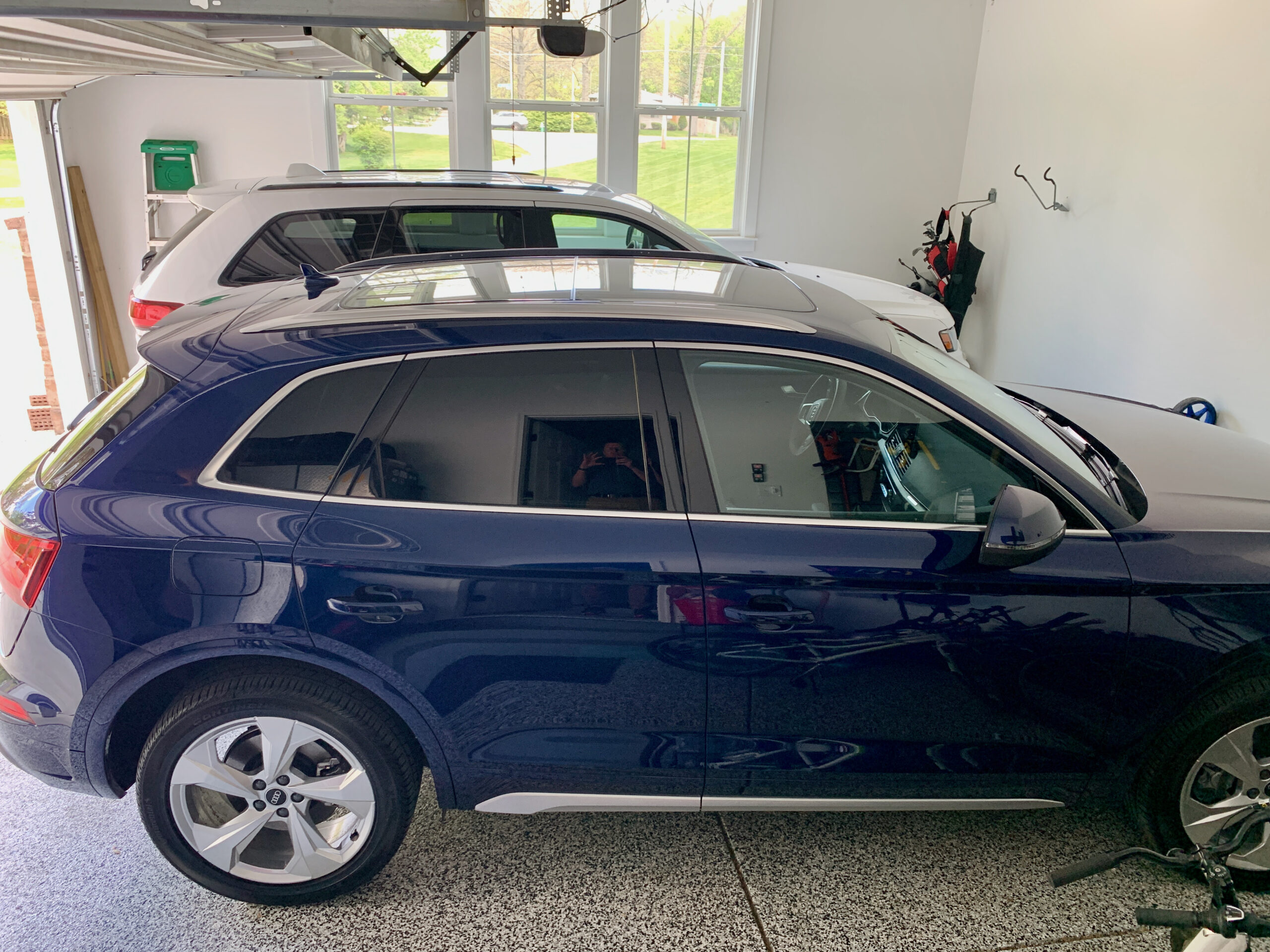 Suddenly there’s a lot more space in our garage!

The Q5 is fun to drive. It accelerates like a whisper. Somewhere in my research I read that you have to be careful because it is very easy to be traveling faster than you think you are. Sure enough, I’ve caught myself cruising along thinking I was going right around the speed limit when I was actually beating it by 10–15 MPH. Unless you really stomp on the gas, it is a quiet, smooth trip through the gears to get up to speed.

The only minor driving quibble is how the engine can be a bit sluggish after it shuts down at a red light. There is a noticeable lag in acceleration as the systems come back up. I believe this is a common issue with most cars that have the Auto Stop function enabled. In comparison, however, S’s Grand Cherokee seems to return to full power much quicker when you step off the brake.

While the driving experience is important, it’s all the bells and whistles that make getting a new car fun.

My sales guy took me on an orientation drive so he could show me how the adaptive cruise control and driver’s assist technologies operate. Under the right conditions they bring the car really damn close to being self-driving. With him in the driver’s seat and all the features engaged, we travelled for several miles, in traffic, with him barely having to use his feet or hands. The forward cameras locked onto the car ahead of us and accelerated or braked to keep us following at a safe margin. The side cameras kept us in our lane by nudging the steering wheel. He did have to take control when we came to a curve or intersection but otherwise he let the car do almost all the driving. At one point he even turned his body completely around like he was getting something out of the backseat and we kept cruising along at 45 with cars all around us.

I did not like this at all! I’m a pretty controlling driver and all of this trust of the car’s systems was too much for me. He asked me if I wanted to give it a shot and I politely declined.

I have used a subset of these features, Traffic Jam Assist. The main road we take to St. P’s every day is under major construction, reducing it from three lanes to a single one and turning what was normally a seven minute drive into closer to 15 minutes of stop-and-go traffic. I’ve used TJA to control the car at these low speeds. I keep my hands on the wheel but the Q5 brakes and accelerates on its own as the traffic crawls forward. Although a little unnerving the first time it eases the brakes on, I can deal with this at 15 MPH and slower.

Like most modern cars the Audi has a robust back-up camera and warning system. Where my Tahoe only had sensors on the front end, the Q5 has a forward-facing camera as well, which makes it much easier to pull into the garage without bumping into golf clubs, bikes, or walls.

It also has a top view camera system, which combines all the car’s various cameras and sensors to form a computer approximation of what your position looks like from above. It’s crazy! And super useful. The girls very much enjoy how the wide angle cameras on the sides of the car make objects directly to your right and left look 10 feet tall as it distorts them. This is a great aid for getting into and out of tight parking spots. 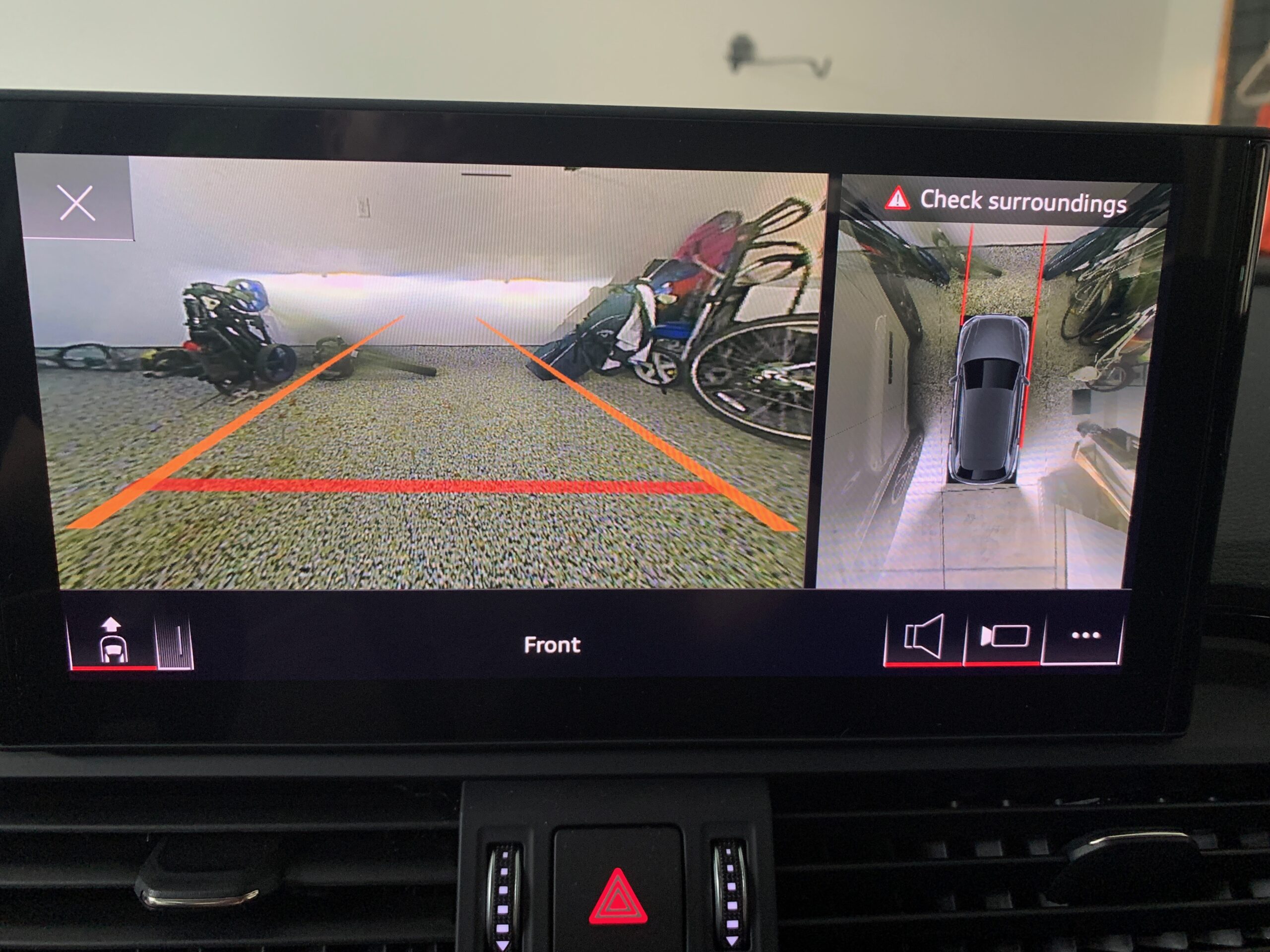 As soon as I got the car our weather turned hot. Which made me glad I sprung for the sports seats with ventilation. I’ve always been a fan of ass warmers in the winter. Now I have an ass cooler, too!

I love having wireless Apple CarPlay, although sometimes it can be a little wonky.

The Q5 also came with three months of free SiriusXM All Access service. I already pay for the lowest tier of SiriusXM, so it is nice to have all the channels for awhile. I’ve had the Pearl Jam station on a lot through the first two weeks. Sirius did mess up switching my account over and I had to spend an hour on their support chat line getting the trial re-started after they wiped it out. That’s a ding to Sirius, not Audi. This is at least the second time they’ve messed up moving our subscription from one car to another. You’d think it wouldn’t be so difficult.

This is our sixth car that came with a SiriusXM trial, and the Q5 is the first to come with the Tune Start feature. It’s pretty dope. Once your car has been running for a few minutes and everything gets loaded, each time you switch to one of your favorite stations, the station will back up to the beginning of the current song so you can hear the entire thing. Because what is worse than switching to a station and hearing the last 10 seconds of your favorite song?

I did not expect to enjoy the panoramic sunroof as much as I do. Normally I hate having sun shine directly down into my old man eyes while I drive, even with sunglasses on. However, the tint on the Q5’s glass seems to be a shade or two darker than the Tahoe’s, making it much more tolerable to drive with the sun shade open.

I knew there would be a large difference in cargo space. I was surprised in how those differences presented themselves.

To take full advantage of the Tahoe’s back end, you had to drop the third row. If you had more than four passengers, you really did not have much cargo space. From a fully capacity passenger aspect, the Q5 actually beats the Tahoe. Of course, if you dropped both back rows in the Tahoe you could buy enough supplies at Costco to last you a year and still have room to spare.

What I did not expect was the difference in cargo space in the main cabin. There are a few nooks and crannies to stash small items in the Q5. But the space beneath the center console is maybe a quarter the size of the Tahoe’s. I used to joke Chevy needed to put a drain in the Tahoe’s center console so you could fill it with ice and cold drinks for long drives. That huge space meant I crammed way too much crap into it, so it was good to reduce the clutter. I do have to be much more choosey in what I stash under my elbow in the Audi. I can squeeze in some Kleenex, glasses cleaner, car wash tickets, a few masks, and the phone of one kid and that’s about it.

Another slight bummer that I was fully aware of going in is the fuel situation. I am getting much better mileage, between 5–7 more miles per gallon at this point. However, a turbocharged German engine requires premium fuel. Which ain’t cheap. I refuse to crunch the numbers to see if the better efficiency is saving me enough to balance the higher cost of the fancy gas. Sometimes it’s better not to know.

My Q5 came with crossbars you can attach to the roof rack. I waited a week to put them on, keeping a careful eye on other Q5s I saw on the road to decide if I liked them better with or without the crossbars. I think the car definitely looks cooler with them on, but unfortunately they cause quite a noticeable whistling sound when you get above 40 MPH. 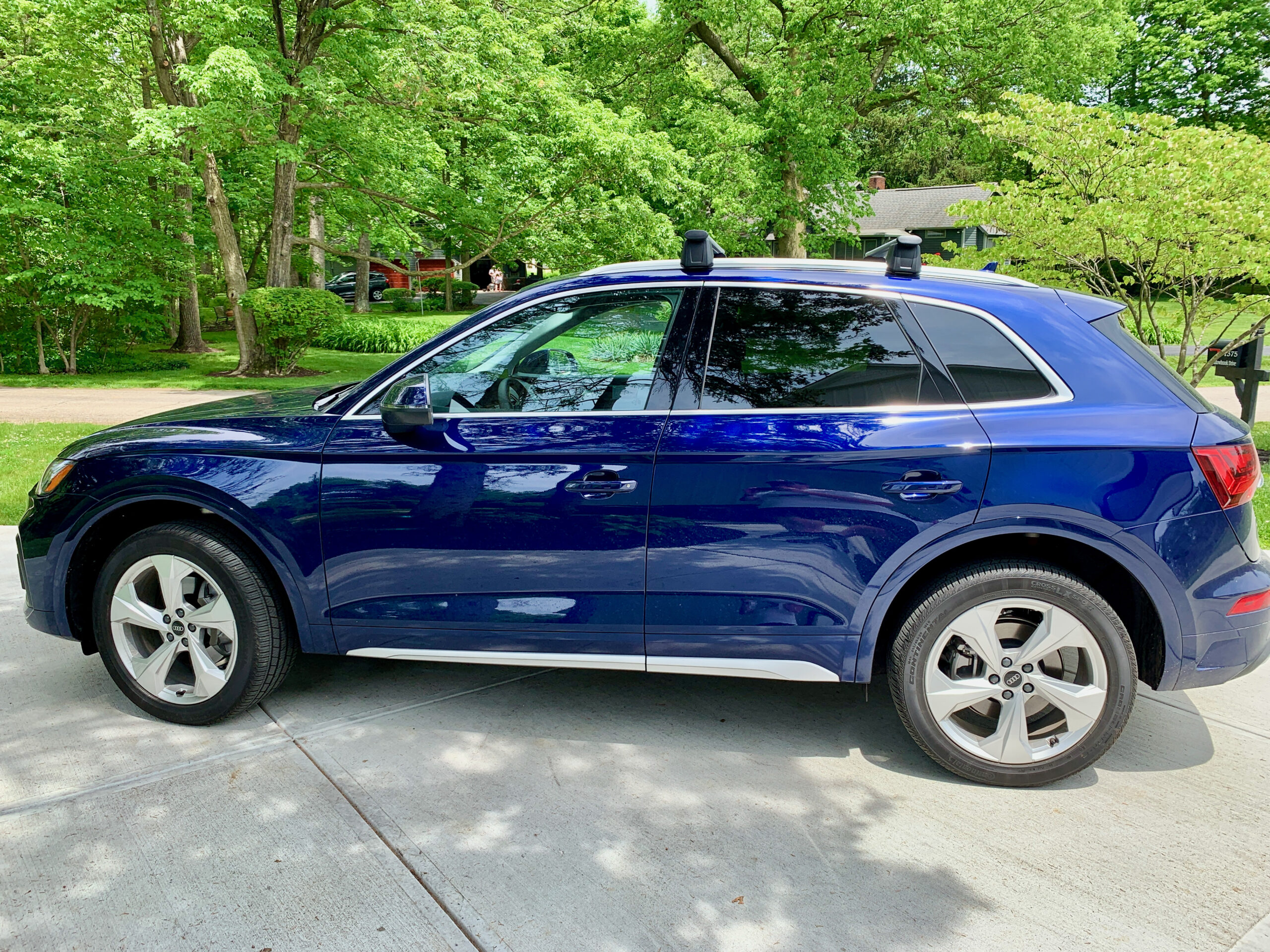 Those are my assorted thoughts after two weeks in my new car. There will always be minor annoyances that rub up against your personal quirks. I’ve found those to be rather few so far. I’m sure had I gone with the Mercedes GLC–300, or eventually test driven and picked the BMW X3 or Volvo XC60, I would be saying similar things. But the Audi Q5 is nice enough that I have zero regrets about jumping on the chance to get into one when I did.