Our long weekends got a little longer thanks to about nine inches of new snow yesterday. C and L were home Friday and Monday thanks to St P’s traditional President’s Day break, while M was just home Monday. All are eLearning today, although L had her assignments done in about 40 minutes and is currently playing Fortnite.

This was the biggest snowstorm we’ve had something like seven years.[1] It was nice for it to happen on a day when the girls were already out of school. We didn’t have to leave the house and could just sit and watch it slowly pile up. Mondays are S’s half-day so she was able to make it home before the roads got too nasty.

For awhile it looked like we could get well over a foot of snow, so just getting 9” seems like a bit of a letdown. It was still plenty to have to move this morning. Fortunately the snowblower worked after not being started for over two years. It took about an hour to get the driveway and walk cleared off. I’m not sure if that was too much for the machine or the snow was different across the street, but when I took it over to help clear our retired neighbors’ much larger driveway, it refused to move any of their snow.

In our backyard the snow of the past three weeks has made it nearly impossible to see where the pool transitions to deck and vice-versa. A crew has been building a pool house for us and that project has been frozen – literally – for two weeks because of the cold weather. They have piles of materials that are buried in the fresh snow. 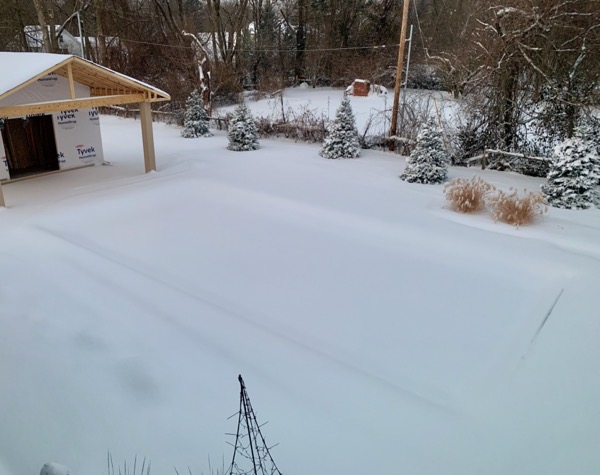 Somehow, for as cold as it has been here the last two weeks, we’ve missed the worst of this cold spell. I know I have readers in Texas, Kansas, Missouri, and Nebraska who have had much colder temperatures than we have. Tomorrow morning our low is supposed to be 0, which will be our lowest low of the year. We’ve had lots of days in the high teens and 20s, but none of the air temps below zero so many of you have experienced.

It’s been crazy reading about the weather in Texas, especially. I have a few friends down there who have been sharing their experiences. A couple have been out breaking up ice in their pools, because Texas pools don’t have covers or heaters. One friend lost power for most of yesterday and her home was down to 48 degrees when service was restored. And the whole rolling blackout thing that several states are going through blows my mind. I’ve never heard of those in the winter before. Nutty times.

The good news is that the sun is out, and its warmth is making the areas where snow has been cleared melt completely to reveal the concrete/asphalt underneath. I think that means it is officially pothole season! The forecast says it may actually get into the 40s early next week. It’s probably too much to hope for, but perhaps these past three weeks have been our winter of 2021 and more moderate days are ahead.