Reaching for the Stars, Vol. 53

This edition is more about how I listened to the song than the song itself. Although there will be some song trivia before we’re done.

1983 was a big year on my Classic Christmas Gifts post list. That was the Christmas I received, among other things, a Pioneer SK–111F boombox. Although that boombox only lasted a few years, it had a huge influence on my life. 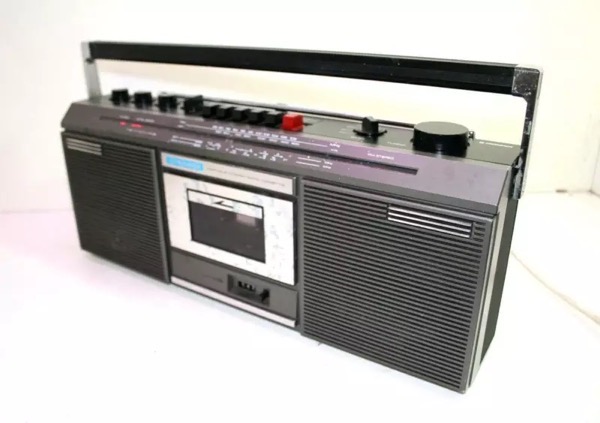 For a few years some manufacturers included the shortwave radio bands on their boomboxes. I imagine 99% of kids who had one of these radios either totally ignored that feature or scanned through the shortwave bands once (likely accidentally), were thoroughly confused, and then ignored them.

I explored them almost immediately and was intrigued, if unsure of what I had stumbled upon. After a family friend who knew a little about international radio gave me some pointers, I started scrolling through the bands more often. Listening to the Voice of America, BBC, Radio Moscow, Radio Havana Cuba, and others come at the same story from very different angles fascinated me. I eventually got a proper shortwave radio and continued listening to those frequencies for many years. [1]

For all the time I spent listening to those government-run stations that focused on news, current events, and general talk programs, there was another surprising station that was on my list of favorites.

WRNO was an FM rock station in New Orleans that also broadcast on shortwave. At the time it was one of the few private shortwave stations in the US, and the only one that didn’t broadcast primarily religious programming. WRNO played Top 40 pop and rock, thus the motto “The Rock of the World,” and also aired Saints football games and programs about the culture of the New Orleans area.[2]

Looking back, it’s strange that I devoted much time to listening to WRNO. The audio was generally bad, worse than even tuning to a local AM station. There was often interference from other stations, or lots of static and fading depending on atmospheric conditions. They didn’t play anything I couldn’t hear much easier and better on Q–104, ZZ–99, or KY–102 in Kansas City. I guess I thought it was cool that I was listening to the same songs at the same time as a kid on the other side of the world.

That’s where this song comes in. I did not like the Stones much as a kid. This song, though, had an unsettling, dangerous edge to it that caught my attention. Casey Kasem told me, at some point, that the song was about political strife in Central and South America.

That was the connecting point.

I wondered how listeners in Nicaragua, El Salvador, Argentina, or other Latin countries in the midst of political crisis would react to one of the biggest bands in the world singing about events they were experiencing first hand. Being idealistic, I liked to think this was inspiring people to throw off the yoke of the oppressor and claim their freedom. Granted, I was a little fuzzy on the details of the conflict in each country. And my politics were quite different at age 12/13 than they are today. But, still, I loved the idea of international radio and rock music playing some part in motivating people to fight for their freedom.

Crazily, while trying to find some images of WRNO to include in this post, I found this clip of a WRNO broadcast that features a few seconds from “Undercover of the Night.”

(There are other clips of WRNO broadcasts on YouTube if you have any interest in hearing more of what its transmissions sounded like.)

I thought I remembered something about this song being controversial. As I read up on it I learned (or re-learned) that it was the video that caused problems. MTV labeled it as too violent and at first refused to air it. After some negotiations and editing, MTV relented, but only played it after 9:00 pm. Watching it from the perspective of 2021 it’s kind of crazy to think that this video raised any red flags. I suppose there is a lot of gunplay. But it all seems cartoonish and no more serious than the fake mustache Mick Jagger wears.

When director Julien Temple offered his video treatment to the band, he was concerned with how they would react. Jagger and Keith Richards were in the midst of one of their more contentious periods. Temple had Richards’ character murdering Mick’s. He didn’t know if Mick would be ok with that, or if Keith could even be bothered to take part. But when the Glimmer Twins read his proposal, they were both thrilled and jumped in enthusiastically. I love that.