I received my second Pfizer vaccine shot on Friday. WHOOOO-HOOOOO!!!!! 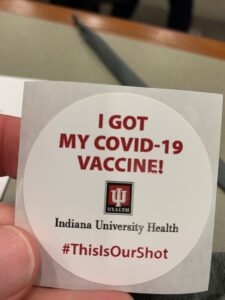 No issues, other than a sore arm. I’ve heard wildly varying stories from others who have already been through both shots. S and several other friends got wiped out by shot #2. In her case, she felt achy and sore and lethargic for about 24 hours. Another friend was out for two days with similar symptoms. However several other folks have reported no issues.

The arm soreness woke me up Friday night when I tried to lay on my left side, but otherwise was noticeable but less intense than the soreness after my first shot.

I don’t know if it made a difference, but I did get the shot in the opposite arm from my first. A friend of a friend who is a virologist suggested that doing so would reduce the arm pain. Just an FYI for those of you who are still waiting to get your second (or in some cases first) shot.

We also got M her first shot last Monday. Indiana opened up eligibility to everyone over 16 two weeks ago. Initially we had her scheduled to get her first shot on May 3 through the state. But a co-worker of S said to check the websites of places like CVS as they were rapidly opening up their schedules. We did and got M moved up by three weeks. She had no issues, not even soreness, with the first shot. I hope she has my luck on #2 as well, because she is scheduled for a Monday and I’d hate her to lose a day or two of school because of a reaction to the vaccine.[1]

As with the first shot, I was filled with happiness as I left the vaccine facility Friday. From the reading I’ve done the experts think the first Pfizer shot provides pretty good protection. The second shot plus a couple weeks means a much more normal life is rapidly approaching.

Along those lines, I re-started my gym membership last week. I talked to a couple friends who had still been going regularly for the past eight months. They said the Y does a good job of keeping things clean, spreading people out, etc. I figured if these ladies have been going multiple times a week for eight months, without a vaccine, and have stayed healthy, it was probably safe for me to go back.

I worked out twice last week. The gym is definitely way less crowded than it was when I last went 56 weeks ago. I was worried about getting access to machines because so much of the cardio equipment is blocked off for distancing measures, but both times I walked in and stepped right onto an elliptical and got to work. It looks like a lot of people are still staying away.

We’ve also made our first plans to go out to dinner with friends in two weeks.

I will continue to wear a mask when out for the time being. Indiana dropped the mask mandate last week, although it is still in place in Indianapolis. I took L to Dick’s in Carmel to go shoe shopping yesterday, and there were quite a few people already walking around without masks. Despite the big signs when you walk in that the store still requires masks.

I try not to mask shame. Who knows, everyone I saw without a mask may have had their second shot two weeks ago, right?

It saddens me how selfish we are as a country. “You can’t make me wear a mask, it violates my personal freedom!” No one likes wearing a mask, but is it really that big of an inconvenience? I wear glasses and have to deal with them fogging up every time I wear a mask. It is annoying as hell, but it’s a temporary hassle towards the greater good. I don’t get why so many people can only look out for themselves and fail to understand that a little personal pain means we save lives plus get back to that normal quicker.

That said, I think this is a time for potentially great joy. Hopefully the reluctant idiots don’t counter the power of the vaccines and keep us in a lengthy cycle of flare-ups and mini-shut downs. We should be in awe of how quickly the vaccines were developed, tested, produced in mass quantities, and then rolled out. There were plenty of errors along the way. Yet here we are, 14 months after America began to shut down, and we are racing toward a majority of the country carrying a defense mechanism against Covid–19.

Along the way we made rapid changes to our lives, many of which were extremely difficult. But most of us bought in because we care about more than ourselves, and realize that all 350 million of us are in this together, whether we like it or not. If I was still young and idealistic I would start dreaming that this could be a jumping-off point for us to do other great things. Alas…