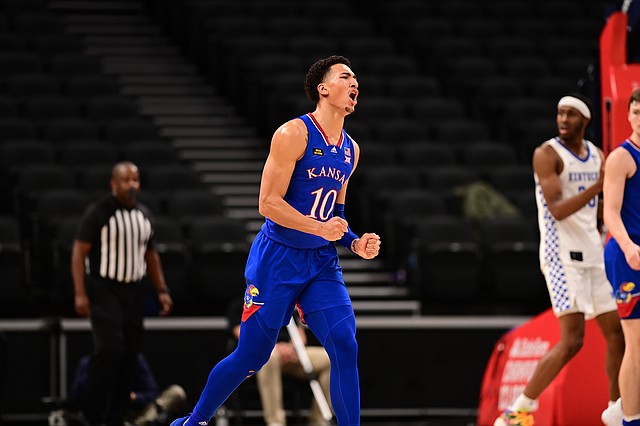 Those glamorous, early November college basketball matchups that ESPN creates to fill the air in the opening weeks of the season almost always disappoint. Oh, you might get a close game, but rarely are these games ones where, afterward, viewers say, “That might be the game of the year!”

The Champions Classic is the ultimate example. It has been college hoops’ de facto kickoff event the last several years, with Duke, Kansas, Kentucky, and Michigan State assembling at a neutral site to play a double header and show off their shiny new toys. Looking back, I can’t think of a single game that KU was involved in that was played at a high level for 40 minutes. Some came down to tight finishes and were exciting. But I almost guarantee if I could pull up my iMessage history from all of those games, you would find texts where my KU friends and I complain about how ugly the game is.

Oh well, ESPN runs the world and no matter how much more sense it makes to push these games back a month, so every team has had a chance to get some competition under their belts and the touted freshmen have a chance to catch their breath, the World Wide Leader needs that immediate content.

This year we kind of got our wish: the Champions Classic is in December! Thanks to Covid, though, it was still in the season’s opening seven days. And the games last night reflected that, with only Michigan State looking very good. And they still almost blew their comfortable win.[1]

My attention was on the KU-UK game, obviously. My messaging fit right into that archetype I suggested above. Lots of grousing about how bad KU was, how dumb the players were, how awful-to-watch the entire game was. That didn’t stop me from getting fired up as KU got their acts together and erased a 12-point deficit then made some huge plays in the final two minutes to sneak out of Indy with a three-point win over the Cats. Certainly better than the last time these teams played here, a 32-point shellacking.

Well, kind of fired up. I’m having a hard time getting pumped up for college hoops this year. Usually come mid-October I start to get jittery when I begin seeing the preview magazines on the newsstands and knowing that the first practices are amping up. For 30-some years that transition into the college basketball season has been a core part of who I am.

But between Covid, the rollover in the KU roster, and the NCAA cloud hanging over the program, my enthusiasm is a bit low for this season.

I/we have no idea if this season will be normal in any way. Frankly it is unbelievable that KU and UK played last night, as KU’s first two opponents and UK’s last all had positive tests following their games, with St. Joseph’s and Richmond shutting activities down for the week. I really, really hope whatever has been ailing Marcus Garrett turns out to be something normal and benign, or last night’s game could be one of those tipping points as the season shuts down just as it begins.

It’s hard to get pumped about a KU roster that is filled with flaws and unknowns. I know, I know, I probably write the same thing every fall. But that emptiness from last season’s team not getting to play out their season remains, along with the memory of how freaking good Devon Dotson and Udoka Azubuike were. There’s no closure on the 2019–20 season, which makes it tough to shed its memories.

And let’s face it, as long as the NCAA shit keeps dragging out, it’s hard to get excited about games and recruiting not knowing if any of it is going to matter.

Oh, and the lack of crowds is just weird. Yeah, we’ve been watching sports with no/limited crowds for over four months now. But crowds are what makes college basketball different and great. The madness of Allen and Cameron. That cool sound that comes from the neutral courts that are divided between each team’s supporters. The tiny gym in Maui packed with sunburnt Midwesterners freaking out when their team goes on a run.

Hearing the coaches yelling at the refs, the benches shouting, and players barking at each other is kind of fun. Still, I would much rather have 15,000 people screaming and covering up all those sounds from inside the game.

So I sat on my couch watching last night relatively chill. I don’t think I yelled until Christian Braun got a dunk late in the first half, and drew a technical for saying “Yeah, bitch!” at the nearest Kentucky player. I let out a whoop then backed up the DVR to make sure I heard what he said. That moment was fun, but T worthy? I guarantee that, or worse, gets said on almost every dunk, but normally there is crowd noise to block it out. Now Braun gets a T and Bill Self later gets a T for saying “Oh God Almighty!” after a touch-foul on the perimeter on the first play of the second half.

The game went pretty true-to-form. A lot of sloppy-ass basketball. Kentucky dominated early with their size and athleticism. One of my buddies made a comment about how we just could not compete with UK’s size and speed. I responded, “Just like every other year.” Seriously, how does Kentucky ALWAYS get these guys? Granted, this year’s crop aren’t as good as those that John Calipari had in 2011–2014. But size and speed go a long way, and I bet he’ll get them playing together by the end of the season.

As KU made a mini-run before halftime, I had the thought I’ve had dozens of times over the past 17 years: “If we can just get it close, Bill can make some adjustments at half and we’re right back in it.”

Yep, a 10–3 run that spanned the half tied the game and the rest of the game was played in spurts until a couple Jalen Wilson threes and an Ochai Agbaji three and dunk gave KU control of the game.

How about Wilson?!?! I loved the idea of him last year, a long 6’8” kid who wasn’t super athletic but was a pure scorer with the potential to become a shooter. A broken ankle wiped out his first year, but who knows how many minutes he would have gotten on last year’s team. This year the perimeter is still crowded, and he is one of several guys who can go off any night. For all the great scorers KU has had in recent years, not many have put up 21 points in a half. He looked confident, efficient, and dangerous.

That’s the thing about this year’s team: there is no offensive super star. They are going to have to spread the scoring around. On nights when a guy or two get hot, they are going to look really good. But on nights when no one can be that go-to guy who gets them a bucket, they can struggle mightily. Fortunately it looks like they have at least four guys who can go out and get 20+ any night.

Dajuan Harris again impressed. When he came in for the first time in the opening half, KU looked lost, getting nothing on offense and playing equally bad on defense. If Kentucky could shoot they could have easily put the game away early. But Harris came in and forced two immediate turnovers and helped KU claw back into the game. While he was on the court in the second half, everything was again smoother on offense. He doesn’t look for his shot, so teams will learn to ignore him until he proves them wrong. But he has a real knack for making the right plays. And he is a menace on defense. A healthy Garrett and Harris together are going to give opposing guards absolute fits.

Poor David McCormack. He seems like a great kid. I saw an interview with him before he got to KU and was excited at how thoughtful his answers were. He didn’t seem nervous or just spout cliches. He seemed mature and like a guy you want to be the public face of your program. He’s taken a lead in the team’s social justice awareness campaign.

But he’s just not a good basketball player. He suffers greatly in taking over the starting 5 spot right after Azubuike, the best true big man Self has ever had. McCormack isn’t nearly as big, as athletic, as confident, and doesn’t have very good hands. He plays shorter than he is. He gets off-balance constantly. He’s just a mess. I’m hoping some of that is just him trying too hard and that he can calm down and be a Landon Lucas-type player. The team sure seems better when he sits down, though.

Anyway, it’s hard to get too pumped about a win over Kentucky – which even though they are super flawed, too, is always a good thing – or who is playing well or poorly when we have no idea if KU will play their next game Thursday, or their game Saturday, or their game next week against Creighton. Everything is on edge again, and as much as I want to sit back and enjoy the games and the distraction they bring for a couple hours, it’s hard not to let reality knock that down.

But, for now, Rock Chalk, bitches.