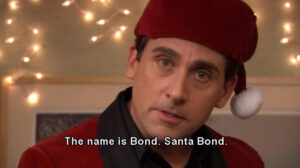 My Wednesday activity, other than preparing for my in-laws to arrive tonight, was watching all of The Office Christmas episodes. As you can imagine, this was an extremely good way to spend time, especially on a very cold, snowy night.

As I watched I thought, “I should put together some kind of rudimentary list, ranking them in order of my preference.” Then I looked and saw there are approximately 8000 of these lists. And, you know, The Office hasn’t had a new episode in seven years, sooooo not exactly relevant.

However, given the show’s continuing popularity, how this has become a bit of a holiday tradition for me (based on two years), and since the show is going from the highly available Netflix to the much more restricted Peacock platform next month, I figured I should do a quick ranking in hopes of nudging some of you to tackle them over the next couple weeks.

1 – Season 3, Episode 10: “Benihana Christmas”
Offensive in sooooo many ways, but generally harmless and always hilarious. And sooooo many classic moments. Michael photoshopping himself into his girlfriend’s family photo and sending it out as a Christmas card. The lunch at Benihana’s. Pam and Karen joining forces to launch an office party rivaling Angela’s. Michael and Andy bringing replacement level waitresses back to the office. The eventual melding of the parties. It gets bonus points for the ending, when Michael finally gets a mystery woman on the phone to agree to go to Sandals Jamaica with him. It is, of course, his boss Jan Levinson, which gave the series treeeeemendous material to work with going forward, including the series’ best ever episode, “The Dinner Party,” in season four.

2 – Season 2, Episode 10: “Christmas Party”
This set down the rules for which all future episodes followed, mostly Michael doing his best to ruin the party for everyone. Plus it shows how “Yankee Swap” rules only work if people are drinking and having fun. The Bob Vance introduction is low key one of the greatest moments ever. “So, what line of work are you in, Bob?”

3 – Season 5, Episode 11: “Moroccan Christmas”
The next three could drop in about any order. And I love the common thread of Phyllis becoming such a big part of the parties. Here she chooses a Moroccan theme to spice things up, forcing Angela to do her biding to keep quiet about Angela and Dwight’s affair. Phyllis dropping the bomb at the end gives this one the nod.

4 – Season 7, Episode 11: “Classy Christmas”
Michael’s old flame Holly returns to fill in for Toby, who is off to serve on the Scranton Strangler jury. In preparation, Michael trashes the planned party for a “classy” one. Michael in his classy Santa hat just makes me laugh.

5 – Season 6, Episode 13: “Secret Santa”
Phyllis as Santa, Kevin sitting on Michael’s lap then not knowing what to talk about, and Andy sending Erin the list from “The 12 Days of Christmas.” are highlights. Also an episode that ends on a warm note.

7 – Season 8, Episode 10: “Christmas Wishes”
The first Christmas without Michael Scott and it showed. By far the weakest of the list. Dwight getting back at Jim for years of pranks comes off as mean rather than cathartic and funny. And I’m not convinced Andy could ever have a girlfriend that looked like Jessica.