I’m guessing this was our last ever four-day Labor Day weekend, at least on the academic side of things. St P’s generally (but not always) gives the kids Friday and Monday off, while CHS just takes the actual Monday holiday off. Who knows what M’s schedule will be this time next year, but she won’t be here, so that means the remaining girls will be on the same schedule for the final holiday weekend of summer in 2023.

L took advantage of her extra day by doing some work for us and family members to earn some money. She’s been drafted as the St P’s football team videographer/photographer and has been saving up for a camera. With a final push over the weekend she was able to order it.

Her first project of the weekend was mowing her aunt’s yard, which she has done a few times. I followed her around with the trimmer, which is too big and too temperamental for her to use. As I was trimming I felt a white-hot heat on my right forearm. I dropped the trimmer, thinking it was in the process of blowing up or something. But I didn’t see any smoke and it started right back up.

But I hadn’t seen/felt anything on me or seen anything fly away. I looked around and then noticed, on my nephews’ swingset/playhouse, the biggest wasp I had ever seen crawling around. I got a fly swatter from inside the house and nailed it. Seconds later several more Big Ass Wasps emerged from under the decking and I fled before they could get me.

Fortunately my sister-in-law had a couple cans of wasp/hornet killer. I unloaded one on the nest I could see poking through the frame and left her instructions to hit it again when the wasps returned for the evening.

Not going to lie: the sting hurt like hell. I don’t know if I’ve ever been hit by a wasp before, but this fucking hurt. Even today, Tuesday morning, the area is all swollen, red, and itchy. I’m not sure what flavor of wasps these were, but I’m just going to call them Murder Hornets because they were so big and the sting was so painful. Still, happy to take one for the team rather than one of my nephews. 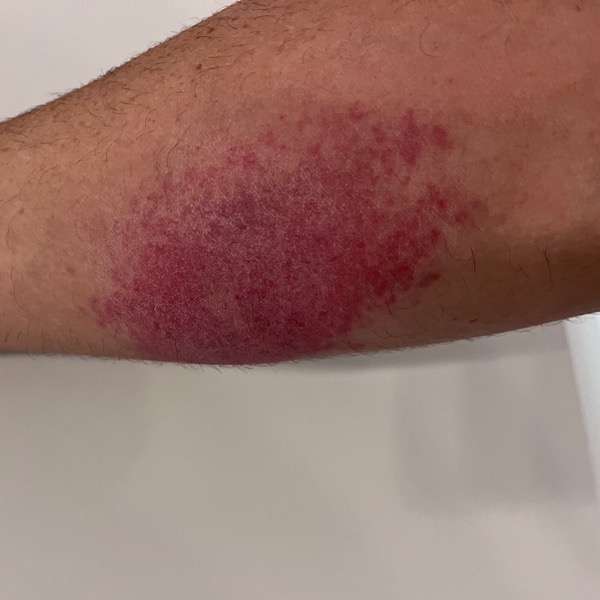 Don’t fuck with the Murder Hornets

Friday night was one of the more interesting sports following nights in my recent history.

I had the US Open up on the TV, watching Serena Williams’ final match that began at 7:00. At 7:30 the Cathedral game began, and I pulled up the audio on my phone. And at 8:00 KU kicked off their season on ESPN+, which I had on my MacBook Air.

It was a bit chaotic keeping track of everything, but I managed, selectively muting as conditions warranted.

I should probably write more about Serena’s loss. I think of my life not really hitting adulthood until right around 1999–2000. That made Serena the last athlete from my extended childhood or adolescence or whatever who was still active. Just another sign that we are getting older.

Props to her for such an amazing career, for coming back after having an insanely difficult pregnancy and childbirth experience, and for going out on her terms. I couldn’t believe she was still playing doubles with her sister Venus on Thursday. I think that effort clearly affected her in Friday’s match. Then I realized that she just wanted to play with her sister one more time and was willing to sacrifice her singles match for that opportunity. When you’ve won everything there is to win, you get to pick how you say goodbye.

Cathedral fell behind 13–0 but then ripped off 35-straight points for a 35–21 win. The game was three hours away so none of the girls went. The Irish had a ton of injuries going into the game, so played a number of kids who had not played the first two weeks. This week they play their big-time rivals BC, who are ranked #1 in 3A and just lost the the #1 4A school on the final play of the game.

KU rolled Tennessee Tech. Which should be expected, and I know non-KU fans are making fun of us Jayhawks for being excited about the win. Never forget this is KU football, a program that has found a way to do the un-doable for decades. Pounding an overmatched opponent is never a given for Kansas, and while one or two more wins is likely the max we can hope for this year, at least we checked off the easy win.

The team looked better, with more playmakers on defense than I can recall. But they still lack depth and things will be very different this week against West Virginia and pretty much every week for the rest of the year and the competition keeps getting tougher and tougher. But this game was the baby step we needed.

Saturday we headed up to S’s aunt and uncle’s in the morning. They live on a lake and offered to take the girls out to ski. M took a brief run and had no issues. L tried but could not get up. C was annoyed about having to wake up early on a holiday weekend and stayed in the boat. We took a nice trip around the lake and got off the water just before rain moved in.

Later in the day L had a basketball game. They were playing a team they’ve played many times. That team plays and practices all year, and added another good player since our last meeting. We were down 13–0 to start then went something like 5–22 from the free throw line and lost by 15. L alone was 1–6 from the line. She was 0–4 from the floor but had three rebounds, three assists, and three steals. She hit one shot that came after a foul was called away from the ball and was super annoyed by that. I was super annoyed she was missing so many free throws after all the practice shots she put up over the summer.

Sunday we had the local family over for our annual Labor Day gathering. It never got too hot or humid and the rain held off, so it was a pleasant day around the pool. I stay the hell out of the pool when the nephews take over. It’s more fun to drink and watch than constantly babysit your kids so they don’t sink.

Monday was your standard, lazy Labor Day. I watched some tennis – Frances Tiafoe upsetting Rafa Nadal was obviously the highlight, a truly enjoyable match. I was bummed Danielle Collins lost, but we don’t need to go into details about that.

(Another quick aside about tennis: Nick Kyrgios beating Daniil Medvedev Sunday was also entertaining. Not sure I’ve ever switched my opinion on an athlete as quickly as I have about Kyrgios. I thought he was a lunatic who needed to be shut down at Wimbledon. Now I think he’s one of the most entertaining, compelling, and interesting players on the tour. Not sure I necessarily love him, but I do root for him to stay in tournaments because they are a lot more fun with him on the court.)

I read a lot, we did some shopping as we prep for our next big trip, and we did some cleaning around the house.

This morning we were socked in by low, thick clouds. When my alarm went off at 6:50 and it was still pitch black my first thought was, “Did I sleep through a month and it’s October 6?” Just a tangible reminder that summer is over.